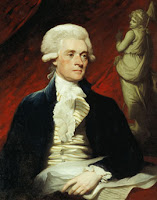 Jan. 5, 1781—Facing only token opposition, Royal troops in Virginia under their notorious new commander, Benedict Arnold, plundered and destroyed at will public buildings and private residences in Richmond, the recently designated capital of the commonwealth.

The attack was so unexpected that few troops were available to stand in the way of the traitor who, for all his double-dealing, continued to display the energy and skill that had once made him so valuable to the Continental Army.

Having no clue until too late as to Arnold’s ultimate destination, Governor Thomas Jefferson (pictured) tried in vain to instigate a military counter-offensive and maintain civil authority in the small community he had done so much to bring into being as the new seat of government in Virginia, leading to charges of incompetence and even cowardice that dogged him for the rest of his life.

Arnold's raid—as well as the larger five-month campaign he conducted in the interior—also had consequences for Jefferson’s personal life. To avoid capture by the English, he sent his wife Martha and young children packing for Tuckahoe, the plantation where he had spent much of his childhood. That journey through the wilderness in the deepest heart of the winter led to his five-week-old daughter Lucy catching a cold that worsened until she died in mid-April.

Forty years ago, in a college seminar on the American Presidency, our professor was fond of pointing out that for many Presidents, their prior experiences as governor foreshadowed how they would act in the White House. How, then, should we view Jefferson’s performance as an executive?

Unlike fellow Virginian George Washington, the “Sage of Monticello” had no experience of physical combat. Unlikely as it might seem, he had even less appetite for political combat. He left after two terms as both governor and President exhausted from the struggle, with the braying of his enemies ringing in his ears.

It is true that the powers of the Virginia governor were weak, requiring consensus by an eight-man Council of State. It is also true that any occupant of the office would be handicapped by the inability to raise funds at that time.

On the positive side, Jefferson had enough popularity to win a second term, and enough foresight to have drawn up, four years before, enabling legislation to move the commonwealth’s capital away from Williamsburg—easily accessible to invading troops attacking with a navy—to a more defensible interior location in Richmond. Moreover, he took care to move arms and necessary papers to safety.

But Jefferson lacked the personal charisma of predecessor Patrick Henry, Washington’s hard-won recognition of the many ways that things could go wrong in a military campaign—or the willingness to exercise the authority of his office up to its constitutional limits. Thus, he did not receive word until late that Arnold was pressing inland from the coast; did not notify Washington in time that Continental troops were needed to repel the invaders; did not guess correctly that Arnold would press towards Richmond rather than Petersburg; and did not call out the militia in time to defend the capital.

(In the case of the militia, Jefferson—suspicious of the threat posed by a standing army to republican government—remained, even three decades later, deeply naïve about the ability of poorly trained soldiers, signed up for limited service, to carry out significant military duties. His belief that Canada could be captured as a result of “a mere matter of marching” turned out to be spectacularly wrong, and the burning of Washington under his successor, James Madison, echoed his own experiences with Richmond.)

Unable to capture Jefferson himself, the redcoats took some of his slaves from the governor’s residence in Richmond. They then proceeded to Portsmouth, establishing there a base from which they could continue to launch raids in the countryside.

With Jefferson’s second term drawing to a close in early summer and no successor in sight, the English reached the Monticello, the mountain estate that he thought would be safe from English deprivation. Again he was wrong, forcing him to gallop away so hurriedly that some mistook it for cowardice.

Following an embarrassing inquiry into his conduct of the defense of Richmond, the legislature adopted a resolution praising his “ability, rectitude and integrity.” But critics began to complain about his lack of decisiveness in directing the campaign—notably Major General Baron von Steuben, who had won Washington’s gratitude and trust for intensively training Continental troops. Steuben was indignant that Jefferson had not used his office to order militiamen or even slaves to construct a fort at Hood’s Point.

Just a few weeks before his death in 1826, Jefferson had been willing to sit down with a son of onetime critic Henry Lee to provide documents justifying his role in the Richmond campaign. But the former President was too exhausted by what proved to be his death struggle to respond at the necessary length.