Slices of Americana at Chautauqua 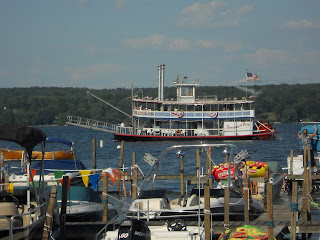 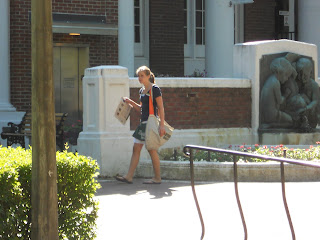 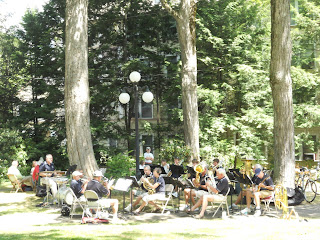 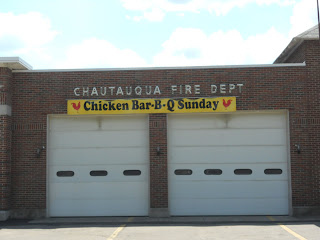 As I write this, I’ve been home a week from my vacation at the Chautauqua Institution, and even back from yet another (albeit short, business-related, and given the transportation circumstances, far less pleasurable) trip. But, as I invariably do, I find it hard to leave this upstate community all behind, even as I re-engage with my job and tackle new challenges there. Before this week is over, I’d like to wrap up different aspects of the trip.

(In other ways, you’ll be seeing evidence of my stay for even longer, as I post pictures of the abundant flowers in this picturesque lakeside village as part of my ongoing “Photo of the Day” series.)

Much has changed at Chautauqua since I first started coming here in the mid-1990s, including the growing presence of cellphones and other electronic devices. But in most important ways, this picturesque Victorian village—a National Historic Landmark—has been altered little during that time.

People keep trying to encapsulate the spirit of Chautauqua in a phrase. On my last full day on the grounds, a speaker at one event compared it with Brigadoon, another enchanted village where time seems frozen. A close relative of mine has called it “Disneyworld for intellectuals.”

In fact, most of the place can still be recognized by Theodore Roosevelt, who, at one appearance, termed it “typically American, in that it is typical of America at its best.” Many proud Chautauquans would support that statement, but a more piquant, instantly recognizable catchphrase was supplied by Jim Leonard, a contributor to the blog “Making Great Places,” who approvingly quoted friends who said it was like “vacationing in a Norman Rockwell painting.”

In other words, Chautauqua might be thought of as a lakeside block of Americana.

The striving for self-improvement, the search for a usable future, animates the spirit of the place, but it also does so by harking back to the past. This post will describe, in words and pictures, exactly how it does so.

The most obvious visual representation of this lies in its architecture, which I described in a prior post. But it’s hardly the only example.

The first slice of Americana that I’m talking about can be found on Bestor Plaza and the nearby Amphitheater, where, early in the morning (and, I was surprised to discover at a concert, even at night), you’ll see and hear newsboys and newsgirls hawking The Chautauquan Daily (second picture above).

Talking about a throwback in time! I was a newsboy more years ago than I’d like to remember, and I think that more than a few of my readers were, too. But how many of us even have our papers delivered (as opposed to downloading them on, say, a Kindle) today by youngsters on foot or bike, as opposed to adults in cars? Very few, I think. Yet that tradition lingers up here every summer.

Time, to be sure, has introduced a few wrinkles in this quaint mode of delivery. The most obvious one is price.

A longtime Chautauqua visitor at my inn recalled as a girl hearing one “newsie” promoting his paper with the cry, “Only one thin dime.” Inflation has taken care of that one.

The cost of a paper had gone up to 50 cents on my prior visit here four years ago, and it had shut up to 75 cents Monday through Friday and a full dollar for weekend delivery during my stay this summer.

But in the way they compete for visitors’ attention and dollars, Chautauquans could easily find common cause with their compatriots on the streets of America a century ago. The young lady in the picture on the left, for instance, had a particularly endearing cry:

“Chautauquan Daily, full of knowledge,
Buy a paper, put me through college.”

What a cry! No plaintiveness, no guilt-tripping—just an emphasis on possibility. Naturally, I dug into my pockets until I found three (not-so-thin) quarters for her.

A second bit of Americana associated is the Sunday chicken barbeque, sponsored by the Chautauqua Fire Department (fourth picture, above). It’s just the type of small-town event that makes for grand fellowship. (I bet it’s especially welcome on the grounds of Chautauqua, where even an event such as this—only held a few times each summer—provides a respite from the paucity of food choices in the gated village.)

The third slice of Chautauqua Americana is the Thursday Morning Brass Band (third picture above), which I encountered, of all times, on a Friday. I had gone to listen to musicians from the Chautauqua Symphony Orchestra (CSO) speak, but their voices were soon overwhelmed by this band, just outside Smith-Wilkes Hall. (I gather that the different sets of musicians had been booked on adjacent spots accidentally, with no expectation that one would overwhelm the other in volume—something I don’t expect to happen again.)

Well, for all my interest in the classical music being discussed by the CSO members, I was having more and more trouble hearing them. Besides, the sounds from the brass band were so cheerful—a form of aural sunshine to complement the visual one all around us (typical songs: “Ain’t She Sweet?”, “76 Trombones”)—that I was easily seduced to slip out.

The third photo captures what I saw: the group of veteran musicians in an outdoor setting. What you can’t see is what they played—the kind of music you could once find easily in thousands of gazebos in town squares early in the 20th century on a summer evening, but now most likely to be played by the Boston Pops on the Fourth of July. When the brass band played “When the Sounds Go Marching In,” the theme song of my alma mater (St. Cecilia High School, Englewood, N.J.), I honored their exquisite taste in music with a little something for the band’s collection basket.

The last bit of Americana in my photo essay is the Chautauqua Belle (first picture above). Four years ago, it was a near-run thing whether this boat, launched in time for America's bicentennial back in 1976, would make it for another season. But it did, and it now endures as one of only four known 100% steam-powered sternwheelers left in the U.S. While checking out the scenery at the northern end of Chautauqua Lake, passengers receive a running narrated historical tour on the community.

I didn’t step foot on the boat this time around, but the loud toot of its horn around 6 o’clock one night made me run to the shore to get a better look—the same way, I’m sure, that young Mark Twain used to attract attention as a Mississippi River pilot in the glory days of the steamboat in the mid-19th century.

His riverboat experience made Twain regard bodies of water as elemental, stern and majestic. After winning fame as an author, he became a mainstay of the Chautauquan circuit of public speakers in the late 19th century. I suspect that this religious skeptic would have loved poking fun at the earnest Protestant spirit that dominated this community in those years, but also that his satire wouldn’t be too savage. After all, he shared their belief in self-transformation and questioning of institutions—elements that remain in the DNA of this community to this day.
Posted by MikeT at 10:05 PM