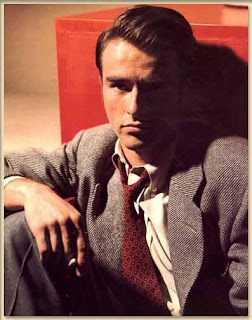 In the second half of May 1956, tabloids were breathless with every scrap of information they could find about the shocking incident involving Montgomery Clift. Leaving a dinner party thrown by good friend Elizabeth Taylor on the night of the 13th, a drunken Clift--not just an extraordinarily handsome leading man but the pioneer of a new acting style on film--got into a car accident that wrecked his looks, heightened his depression, and launched him into a physical decline that culminated in a fatal heart attack a decade later at only age 45.

At the time of the accident, Clift and Taylor, co-stars in A Place in the Sun, were filming Raintree County, a movie that, with its Civil War setting, built-in audience (readers of Ross Lockridge’s bestselling novel) and steep costs, was inviting comparisons with Gone With the Wind.

MGM executives, then, were probably close to a heart attack when they learned that their male lead’s injuries were so severe (multiple facial lacerations and broken bones) that he’d require extensive plastic surgery and production would have to shut down for two months.

You can sense the duality and darkness at the heart of Clift in the image accompanying this post, taken before the career-changing accident. The good looks are there, along with the sensitivity, but there’s also depression, drawn out by the shadows on one side of the face. The photo is so piercingly, nakedly personal that you’d apologize for intruding on his pain, if only you could.

On screen and stage, that duality allowed Clift to depict characters with an inarticulate yearning for something more--and a sudden paroxysm of violence. His Oscar-nominated roles in A Place in the Sun and From Here to Eternity culminated in acts of violence. On Broadway, the 22-year-old actor had first made his mark as the Cain-like son in Thornton Wilder’s comedy The Skin of Our Teeth.

“Monty had a special kind of pain, a pain he could not release,” recalled James Jones, who wrote the novel From Here to Eternity and hung out with the actor during production of the classic movie. “He had a tragedy hanging over his head like a big black comic-strip cloud. It was so distinct you could almost see it.”

Some of the “pain he could not release” might have stemmed from a childhood dominated by a domineering mother and a distant father, but far more related to his bisexuality. He went to great lengths to hide his attraction to men--and he needed to at that time, when such revelations would not only destroy his career but leave him at the mercy of the law.

Toss in two longtime medical conditions--dysentery and colitis--and you have the makings of a mounting drinking problem. When immersed in the craft of acting, Clift impressed his colleagues with a fearless immersion in his parts (Taylor was amazed that he was actually drenched with sweat at the conclusion of a scene in A Place in the Sun). But away from the set, he became out of control.

One of the antics in which Clift engaged when under the influence was driving perilously close to other cars--close enough even to nudge them. That was the situation the night that Clift drove away from Taylor’s. Actor Kevin McCarthy, directly below him on the hill, was certain at first that Clift was pulling “one of his practical jokes” again, but the gathering speed of Clift’s car made McCarthy think he might be having a blackout. On the second turn down from the hill, Clift suddenly veered into a telephone pole.

After seeing Clift’s face—a bloody pulp—McCarthy ran back to Taylor’s house. The actress, screaming, fought off McCarthy and then-husband Michael Wilding and ran down to Clift’s car. Only her quick action--sticking her fingers down his throat and pulling out two teeth lodged there--prevented him from choking to death while waiting for an ambulance.

Taylor aided Clift in one other way. As the tabloids got wind of the accident, photographers rushed to the scene, hoping to get a shot of Clift’s bloody face. As soon as she saw what they were up to, she threatened that if they took a single picture of her friend, she would never allow them to take another photo of her. They backed off.

Doctors fixed Clift up enough so he could finish Raintree County, but his career was never really the same. His alcohol consumption continued to rise, a dangerous tendency worsened by increasing use of pills.

And then there was his face.

Friend Jack Larson (best known from his role as Jimmy Olsen on the Superman TV series) reassured Clift that he didn’t look that different after the surgery, but knew better: “His mouth was twisted. A nerve had been severed in his left check so that the left side of his face was practically immobile--frozen. His nose, that perfect nose, was bent--crooked--out of shape. He looked stuffed, that’s the only way I can put it.”

It became something of an audience game to pick apart all the ways that Clift looked different after the accident. The man who earned three Best Actor nominations in six years, who predated Brando, Dean and Newman in bringing The Method to Hollywood, was finding it harder to land leading roles.

The definitive comment on the post-crash Clift might have been made by his co-star in The Misfits, Marilyn Monroe, who described him as “the only person I know who is in worse shape than I am."

Clift would score one other Oscar nomination, in a role that made use of his mounting emotional torment: a mentally challenged victim of the Nazis in Judgment at Nuremberg (1961). But the decade after the accident would become, in the words of acting teacher Robert Lewis, “the longest suicide in Hollywood history.”

Taylor, who pushed hard to land Clift a role in her Suddenly Last Summer (1959), hoped to do the same with her 1967 film, Reflections in a Golden Eye. Clift, who hadn’t acted in four years (Universal Studios had sued him because production on the film Freud became delayed because of his health problems), took the lead in The Defector to prepare to be in front of the cameras again.

The Reflections in a Golden Eye role--a repressed homosexual--might have been too close to home for the actor to handle, but we’ll never know for sure. He died in the summer of 1966 from heart problems, before he had a chance to revive a career that, for all its painful brevity, was remarkably influential.
Posted by MikeT at 7:29 PM