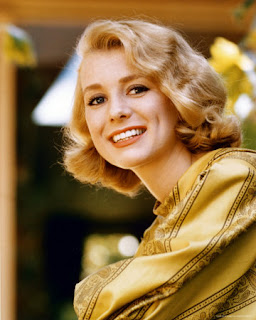 January 1, 1960—Returning from a New Year’s Eve party, a despondent Inger Stevens tried to take her own life. The desperate act would have surprised many fans (myself included) of the sunny TV rom-com that would make her a star in a few years, The Farmer’s Daughter. But it foreshadowed another attempt, a decade later, that ended with the Swedish-born actress’ death.

(Note: Variations exist on the Internet concerning when the early unsuccessful attempt took place, ranging from 1959 to 1960, with the confusion undoubtedly occurring because of the turn in the year. I’ve chosen 1960 because that comes from the Stevens' Web site above, which seems most authoritative.)

Suicide during the holidays has gripped the popular imagination for a long time, undoubtedly spurred by classic movies such as Frank Capra’s Meet John Doe and Billy Wilder’s The Apartment. Snopes.com reports, however, that this supposed seasonal upturn is, in fact, an urban legend.

The case of Inger Stevens, however, is one real-life incident that buttresses the myth.

Why do people commit suicide? Novels and movies, because of their interest in narrative, convince us that there’s an ultimate, knowable cause. From people in my life who have attempted it, however, I’m not sure that there is such a neat cause-and-effect.

If you want a symbol for the mystery involving the taking of one’s own life, look to what is commonly if incorrectly known as Grief, the memorial statue executed by Augustus St. Gaudens for Henry Adams, whose wife Marion (nicknamed Clover) committed suicide. Though the figure's facial features can be seen, the eyes are shut, as if there's a point beyond which sight cannot comprehend.

Stevens’ act is an example of someone whose motives in these two attempts to take her life remain ambiguous. But before we get to the circumstances surrounding her case, it’s probably necessary that we consider who Inger Stevens was. Her early death, before she could establish a lengthier, more certain film and TV legacy, makes this an unfortunate necessity.

Is there anyone under the age of 45 who remembers The Farmer’s Daughter? Anyone under the age of 50? That’s how old I am, and I only caught the show in syndicated reruns in the late Sixties. The series ran from 1963 through 1966, and had already ceased its first runs by the time I caught up with it. In the years since, it’s been extremely difficult, even in the age of cable, to find it anywhere on the tube.

I’m too young to remember particular episodes, but all these years later I can still recall the theme song (and no wonder—the songwriters were Barry Mann and Cynthia Weil, more famous for Sixties hits such as “We Gotta Get Out of This Place” and “You’ve Lost That Lovin’ Feeling”), the show’s gentle style, and the warm beauty of Stevens. The last two were, to no small degree, related.

Stevens was nothing like the frosty Scandinavian stereotype. You can sense her appeal in this YouTube video, an extended scene from The Farmer’s Daughter that establishes the central situation of the sitcom.

The series, about a young Swedish woman who becomes governess to a widower Congressman’s two children, only to fall in love with her employer, was a TV spinoff of the 1947 film. The very capable TV actor William Windom assumed the role of the Congressman that Joseph Cotton had on film.

Loretta Young won her Best Actress Oscar for her role in the movie, but Stevens had a major advantage over her: She did not have to act Scandinavian; she was. That accent was real.

Her blond good looks reminded many of Grace Kelly, but there was nothing of the Irish-American actress’ regal reserve in Stevens. She seemed to give of herself in her roles—to the children, in this series, and to her leading men on screen.

All too often, life imitated art in the latter case, as, like Kelly, she embarked on affairs with a number of her male co-stars. The emotional complications only compounded a childhood and youth of more than the usual emotional turmoil.

Stevens’ parents divorced when she was six. After several years of living with an aunt and uncle, she rejoined her father, who by this time had emigrated to the U.S., where he was teaching in a university, and had remarried. Constant bickering with her stepmother led the teenaged Stevens to run away from home and become a burlesque dancer.

Once she reached adulthood, Stevens became a model, then an actress. An early marriage to an agent quickly foundered, not helped by her rumored affairs with co-stars on film such as Bing Crosby, James Mason, Anthony Quinn, and Harry Belafonte.

These affairs led nowhere, and perhaps the emotional fallout exacerbated the pain she felt growing up. Stevens gave no other explanation later for what she did next except that it was a “stupid” act.

A former talent agent and (at the time) NBC VP in charge of talent, David Tebet, took her home early from a New Year’s Eve party. A couple of days later, concerned that he hadn’t heard from her again, he phoned her Gramercy Park apartment. Still no answer.

Police then found her unconscious, and determined she had taken sleeping pills and ammonia. The attempt left her with blood clots in her legs (which had swollen to twice their normal size) and temporary blindness. Miraculously, though, within a few weeks, she had recovered and returned to work.

Her role in The Farmer’s Daughter came four years later. The sitcom reflected a publicly more innocent time, but it was certainly not embodied in the actress’ own life. Two years before it premiered in 1963, she had married an African-American musician named Isaac (Ike) Jones.
At the time, interracial marriage was illegal in a number of states, and socially frowned upon. (Sammy Davis Jr. had been asked by Jack Kennedy not to bring along his wife, the Swedish actress Mai Britt, to the inauguration, and singers Darlene Love and Bill Medley of the Righteous Brothers concealed their love affair for years.)

In this environment, Stevens and Jones chose to conceal their marriage. This must have caused tensions, which were not helped by the usual problems in show business, such as long absences from each other and attractive work colleagues who posed temptations.

Stevens attempted to make the leap from TV back to film after The Farmer’s Daughter left the airways. Though she harbored some doubts about the ultimate value of acting as an artistic pursuit and had just had another affair (this time with Burt Reynolds, her co-star on the TV movie Run, Simon, Run), her career still appeared to be going solidly. She had just accepted an offer from producer Aaron Spelling to return to TV when she was found dead on April 30, 1970. Barbiturates were found in her bloodstream and her death was ruled a suicide.

Stevens’ death was a double tragedy: it not only shortened her life and legacy, and any chance that she would find the happiness she had sought relentlessly and sometimes recklessly, but it also left no clues about what led her back to despondency. With greater objectivity about her troubles, the actress might have reflected on the void that this inability to articulate her despair left. She had, after all, been a prominent advocate of mental-health issues, especially on behalf of special-needs children. Suicide is such a harrowing experience for those who try to grasp its aftermath that we need desperately to understand why.
Posted by MikeT at 11:51 PM

I remember "The Farmer's Daughter" when it first ran on TV. I was a young teenager at the time. I loved the show because Inger Stevens was such a charming and sunny personality. William Windom was perfectly cast as well. I remember how shocked I was that she had committed suicide.

Thank you for your comment. I hope you'll visit this blog again!

According to friends, Stevens was tired of living a double-life, being married to Ike Jones, a "Black" man, but keeping it secret from the public. Jones and Stevens had also grown estranged. This may provide an explanation for her despondency.

Alcoholic problems were not addressed.

I remember reading at the time that she suffered with feelings of dysmorphia about her face...which seems crazy since she was so beautiful. I can't confirm though since it's been nearly 50 years.

Early episode of Bonanza 1959. Beautiful lady. Hoss fell in love with her but it wasn't to be as she was terminally ill.