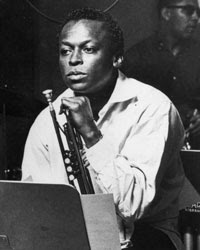 August 25, 1959—Last month, Henry Louis Gates asked the policeman responding to reports of a break-in at his Cambridge, Mass. home if he was being questioned “because I’m a black man in America.” For all his outrage, whatever indignities the Harvard professor experienced on that now-famous night pale next to what happened to Miles Davis outside Birdland 50 years ago.

Here was another case in which a white cop in a metropolitan area failed to recognize one of the most famous African-Americans of his day—only this time, the civilian, Davis, ended up on the ground bleeding before being arrested, brought to police headquarters, then forced to run a months-long legal gauntlet.

The Gates case provoked weeks of cable TV rants, blogger battles, and a beer summit at the White House; the Davis incident nearly started a race riot, at a time when U.S. credibility as a beacon of liberty was being questioned abroad because of the continuing American apartheid.

It happened only months after what might have been the professional highlight of the trumpeter’s life: Kind of Blue, his bestselling album and, as The Wall Street Journal noted earlier this year, still considered “for many, the quintessential jazz album.”

Three decades later, in the autobiography he co-wrote with Quincy Troupe, Davis still couldn’t get over the outrage that “changed my whole life and my whole attitude again, made me bitter and cynical again when I was really starting to feel good about the things that had changed in this country.”

Just before midnight, near the end of a triumphant two-week run at the jazz club promoting the release of Kind of Blue, Davis, between sets, had just escorted “a pretty young white girl named Judy” to her cab. Tired on this steamy summer night, he paused outside Birdland to take a drag on a cigarette when a white cop told him to move along on the crowded sidewalk.

“Move on, what for?” Davis asked. “I’m working downstairs. That’s my name up there, Miles Davis.”

The officer repeated his command, then decided to make an arrest when Davis gave him a hard stare. The cop claimed that Davis pulled away, then tried to grab his nightstick; Davis, who’d taken boxing lessons, said he was moving forward to cushion the force of any blow that might come.

One of three detectives passing by saw the cop falling forward, then rushed toward the musician, pounding him repeatedly on the head with his nightstick.

The beating occurred in a terrible moment in New York, when a deeply racist police force was bringing to the surface long-simmering anger among African-Americans. Not long before, the arrest of a drunken woman in Harlem had led to a riot that required the intervention of boxer Sugar Ray Robinson to quell.

This time, with more than 200 people yelling for the cops to stop beating Davis, the potential for trouble seemed just as great. Hauled down to the 54th Street precinct headquarters, the musician was, he said later, constantly provoked by cops, then booked for disorderly conduct and assaulting an officer. A doctor from St. Clare’s Hospital put five stitches in his scalp.

The next day, columnist and TV personality Dorothy Kilgallen, a friend of Davis, had a front-page story in the New York Journal-American about the beating, and pictures of the musician bleeding while in police custody flashed all across the country.

After two separate court appearances, Davis was acquitted on both charges. He had threatened to sue the police department for half a million dollars, but the suit fizzled out. (According to the musician, his lawyer had failed to file in time to beat the statute of limitations requirements; biographer John Szwed repeats rumors that Davis was amenable to dropping the case, lest the incensed police “make even more trouble for him.”)

Davis had expected racist treatment in his native East St. Louis, but not in supposedly tolerant New York. “But then, again, I was surrounded by white folks and I have learned that when this happens, if you’re black, there is no justice. None.”

Just how much the incident seared the musician can be seen in You’re Under Arrest, an LP released just over a quarter century later, in which Davis mixed denunciations of police brutality and Reagan foreign policy.

Like Frank Sinatra, Davis was a man whose belligerence often camouflaged a sensitivity that came out most piercingly in love songs. It’s an open question how much of the trumpeter’s moodiness and irritability over the years derived from insecurity, how much from the effects of substance abuse, and how much from the pain of living in a country where he felt marginalized by the color of his skin.

Davis was particularly incensed at accusations that he was racist and irredeemably angry. Just how complex a personality he was can be seen on You’re Under Arrest. Side by side on the album, next to songs of volcanic pain and rage, are ones where he reached for another emotion. How well he could achieve this, even in his final years of physical decline, can be seen in one of the latter songs, Cyndy Lauper’s “Time After Time.” It was as if he had achieved a transcendence, through his instrument, that he couldn't find in life.
Posted by MikeT at 8:10 PM

A great recounting of a story that is rarely told.